The baptistry is where children and adults receive the sacrament of baptism. The Gospel of Matthew tells us that after his resurrection, Jesus told his followers to
​ “. . . make disciples of all nations, baptizing them in the name of the Father and of the Son and of the Holy Spirit” (28:19). 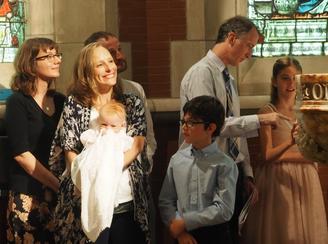 The vessel that holds the water used in baptism is the font. Grace’s font is carved Derbyshire alabaster imported from England. Its stands on three bases, of black, red, and white, and is surrounded by four angels, each bearing a symbol of the gifts of baptism: a lily for purity, the cross for redemption, a scroll for knowledge, and a crown for glory and eternal life.

Its carved oak cover is in the shape of an architectural spire with figured buttresses and four main panels and niches. Within the niches are figures of saints: St. Stephen, the first martyr (see Acts 6 and 7); the infant John the Baptist with his mother Elizabeth (see Luke 1); and two other saints that tradition tells us were martyred under Roman persecution: St. Agnes and St. Faith. Above the saints are spring flowers.

The cover is surmounted by a dove representing the Holy Spirit, who is a vital part of every baptism (see John 3:5; and Book of Common Prayer, beginning on page 299.)

Learn about the stained glass windows in the baptistry here.