Madeleine Woodworth
Director of Music
Madeleine developed her love of choir, conducting, sacred music, organ, and collaborative music while participating in the music program at Grace Episcopal Church in Oak Park, under the tutelage of Dr. Dennis Northway. She began studying piano with Dr. Sally Sloane at age 6, and organ with Dr. Northway at age 13, and she graduated from the Chicago Academy for the Arts, with a double major in piano and organ. Madeleine earned her Bachelor of Music in Organ Performance, studying with Nathan J. Laube at the Eastman School of Music in Rochester, NY, where she also studied conducting with Dr. William Weinert and church music with Stephen Kennedy.

At the Yale School of Music and Yale Institute of Sacred Music, Madeleine sang in the Yale Schola Cantorum and studied with Marguerite Brooks, Dr. Jeffrey Douma, and David Hill to earn her Master of Music in Choral Conducting. During her second year at Yale, Madeleine served as Choir Director of the Marquand Chapel Choir, the experimental service laboratory for the Yale Divinity School students, where she emphasized programming of living and diverse composers. She has participated in master classes and workshops with conducting mentors including Masaaki Suzuki, Simon Carrington, Dr. Jerry Blackstone, Dr. Joe Miller, Diane Witry, and Sarah Ioannaides. Upon graduating from Yale, Madeleine was awarded the Robert Shaw Prize for excellence in conducting and the Richard Paul DeLong Prize in church music.

Currently, Madeleine serves as the Director of Music at Grace Episcopal Church in Oak Park and sings alto with La Caccina, a nine-voice professional treble vocal ensemble in Chicago. She is on the National Marketing Committee of the AGO and served as a Member at Large for the Chicago Chapter of the AGO in 2018-2021. She is a member of the Association of Anglican Musicians and is active in the Oak Park Alumnae Chapter of the music fraternity, Sigma Alpha Iota. In her free time, Madeleine enjoys exploring cities, trying new restaurants, playing video games, and spending time with friends and her cat, Tigger.

The Vestry is the body within a congregation that, with the clergy, leads the parish. Grace’s Vestry meets monthly, on the third Tuesday at 7:00 pm, currently online. In addition the Vestry periodically schedules additional and/or special meetings as needed. ALL Vestry meetings are open to members of the Congregation.  The schedule for Vestry meetings is at this link. 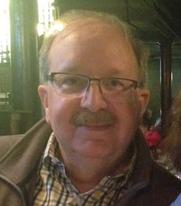 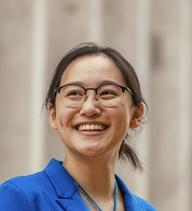 Jon has been a member of Grace since 1982, and has served as a deacon at Grace since 2004.  His main work at Grace is to encourage and enable the people of Grace to help those in need, whether inside the parish, or in our neighborhoods, our region, our nation, or the world.

Deacon Jon serves as a volunteer in the church.  Outside the church, he was a Senior Software Developer at the Railroad Retirement Board in Chicago.  (If you're having trouble falling asleep, ask him to explain the intricacies of unemployment benefits for railroad workers.)  He worked there for over 30 years, and occupied cubicles within a 50 foot radius on the same floor after 1988.

Jon is married to Marion.  They have two adult children, Martha and Peter, who both live in the Chicago area. 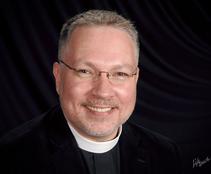 Fr. Rumple began his ministry at Grace in September 2019.

In the words of our wardens, "Father Rumple is a New Testament scholar, and a kind and caring shepherd to his flock. He and his husband, Christian Hoffland, are both dedicated to the best of the Anglican tradition in liturgy and music -- as well as to hospitality and good humor."

Fr. John holds a Master of Arts in Preaching, a Master of Divinity and Ph.D. in New Testament, as well as a diploma in Anglican Studies from General Theological Seminary, New York City. He earned his Ph.D. in New Testament Language, Literature and Theology from the University of Edinburgh, in Scotland, where he and his Scottish husband, Christian, lived for several years before returning to the United States.

Father John’s bachelor’s degree is in homiletics and biblical studies, and he has worked overseas as a Bible translator.

He has a heart for missions, having worked in Papua New Guinea, Tanzania, Honduras, and Haiti.