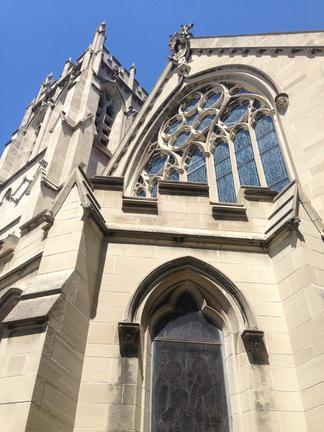 This section of our website is under construction -- keep checking back.

Please click the links below for more details about many facets of our beloved building.

Grace Episcopal Church of Oak Park is among the best examples in America of the Gothic Revival Movement which so captured the imagination of English and American church architects in the 19th century.  Grace Church, designed by noted architect John Sutcliffe, is an 1898 interpretation of St. Paul’s, Knightsbridge, London, built in 1839.  The Gothic Revival movement intended to create both a liturgical space and a liturgical experience that reclaimed a sense of catholic spirituality and mysticism that its proponents felt had been lost to the Protestant Reformation.

Grace was founded as a mission in 1879 and quickly grew to an organized parish by 1881.  The congregation had outgrown its first home, a small wooden Gothic building on Forest Avenue, by 1895, when we bought land on Lake Street for the current building.

Grace Church broke ground for the present building in 1901, and the 11,000 square-foot brick and Indiana limestone nave was completed in 1905.  Thereafter, the congregation continued to build according to the original 1898 blueprints until the church and its interior appointments were completed in 1967.

While similar structures remain today unfinished—such as St. Luke’s, Evanston—or have suffered from the “tinkering” of different architectural ideas through the decades since their conception—such as the Cathedral of St. John the Divine in New York City—Grace Church, Oak Park, is a nearly pristine execution of its founding congregation’s vision and its original architect’s intent.