This window by the Charles J. Connick Studios of Boston was installed in 1954, although the first dreams and sketches of its design began in the early 1920s. It features symbols of the sacraments above figures of Christ as prophet, priest, and king, along with many early saints, presented in a style reminiscent of medieval art, on a background of deep blue glass, much like the blue stained glass seen in the great medieval cathedrals of Europe.

It was given by members of the congregation “to the glory of God and in thanksgiving for those who have served their church and their country.” Its theme is the church on earth; the north window represents the church in heaven.

Third row, left to right. Identified in text to right.

Fourth row, left to right. Identified in text to left.

5. Paul, Apostle to the Gentiles. Depicted with a sword, the traditional instrument of his martyrdom in Rome. 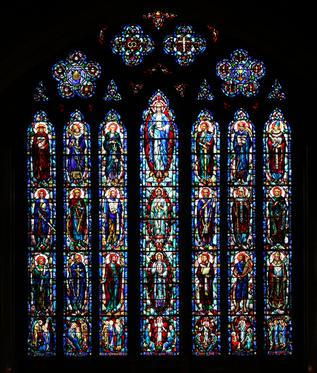 6. Alfred the Great, d. 901. Wise and devout Saxon king who defeated Viking raiders and later reformed education and law in peaceful Wessex. Depicted with a harp; legend has him spying on the Viking camp in the guise of a minstrel.

7. Lanfranc of Canterbury, d. 1098. Archbishop, counselor to King William the Conqueror, and leader of the Norman renewal of the church in England.

Top row, left to right. Identified in text to right.

Symbols of the seven sacraments are arranged around an incense burner representing prayer (Psalm 141:2, “Let my prayer be counted as incense before [God].” From the top, the sacraments represented are:
1. Penance, or Reconciliation
2. Confirmation
3. Holy Orders, or Ordination
4. Baptism (one of the two major sacraments)
5. Marriage
6. Unction, or Anointing of the Sick
7. Holy Communion (the other major sacrament)

Second row, left to right:
1. Martin of Tours, d. 397. Roman soldier and later bishop. Depicted with sword used to cut his cloak in half to clothe a beggar.

6. Boniface, d. 755. Missionary bishop to Germany, martyr. Depicted with ax used to cut down a tree sacred to pagans.

Second row, left to right. Identified in text to left.