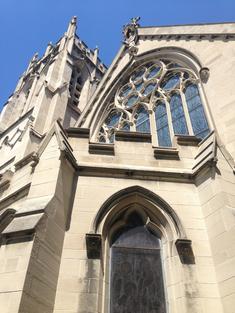 #1 Bell Tower.  The base of the tower acts as the vestibule for the sanctuary. Above are the Charles Seabury Memorial Chimes, a ring of 10 bells ranging in weight from 250 to 3,600 pounds produced by the Meneely Bell Foundry of Troy, NY, in 1922.

#2 Baptistry.  In Medieval Europe, the baptistry was often a separate building of octagonal shape. This baptistry is a truncated octagon open to the sanctuary. The font is alabaster from Derbyshire, England, and stands on three marble steps, one each of black, red and white.  The wooden cover, which is carved in the shape of an architectural pinnacle with figured buttresses, is raised by a pulley and octagonal counterweight seen near the ceiling.  The windows depict scenes from the life of Jesus and of baptism. (See #3 for more about the church windows.)

#3 Nave.  The nave is the long central part of a church with a high ceiling, resembling an inverted ship, often flanked by side aisles with lower roofs.  This wooden ceiling has no metal beams or supports.  In this style of construction, the weight of the ceiling, and the tile roof over it, is carried by horizontal wooden hammer beams to the pillars, then to the outer walls and external buttresses, and ultimately to the ground. The sanctuary has a shortened cruciform plan typical of many medieval churches.  The high altar, which defines liturgical East, actually faces North and the two transepts, (respectively liturgical South and liturgical North), are actually on the East and West sides.

The program for the stained-glass windows was designed by Sutcliffe and his diagram showing the planned locations and subjects is available to be viewed. This program was largely followed as the windows were installed.  The majority of the windows at ground level are by Heaton, Butler & Bayne of London.  Placards identify the subjects. Note in particular the trefoil and quatrefoil tops to these windows which depict a celebration of angels in all manner of poses.   A rare entry in the window program is the “Raising of Jairus’ Daughter”.  The clerestory windows on the upper level feature Old and New Testament figures.  These windows are generally more modern, and were produced by well-known glass studios including Whippel (England), Willett (Philadelphia), and Connick (Boston).  The south-facing great window above the Baptistry has a more two-dimensional aspect typical of the medieval period. The exceptional overall blue cast is reminiscent of the blues in Chartres Cathedral in France.   The quatrefoils at the top of the window display the seven sacraments and the central lancet below depicts Christ as King, Priest, and Prophet. The figures on either side are Fathers of the Church. There is a drawing of this window available to help identify the figures.

#4 Sutcliffe/White Memorials.  Born in Lancashire, England, John Sutcliffe (1853–1913) trained first in surveying and architectural design as apprentice to his father and later in art at Manchester Grammar School where he both taught and studied. He and his wife Lydia came to this country in 1886 where he practiced as an architect in New York City and Birmingham, Alabama, before moving to Chicago in 1892. He is principally known for the over 100 churches he designed in this country.  In addition to Grace, there are two others in the Metropolitan Chicago area: St. Christopher’s Episcopal in Oak Park and St. Luke’s Episcopal in Evanston.  Sutcliffe was a member of Grace Church and is honored by a marble tablet in the East aisle.

The Parish House and the Rectory were designed by Charles White (1876 – 1936) who began his career in the Chicago area at the Oak Park studio of Frank Lloyd Wright.  He designed the Oak Park Post Office, the Cheney Mansion, and numerous other notable homes in Oak Park.  After the death of John Sutcliffe he oversaw the completion of Grace Church.  A bronze tablet in honor of him is found directly opposite in the West aisle.

#5 East Transept.  This transept contains two windows by the studio of William Morris, Westminster, England.  Morris is well known as the founder of the Arts & Crafts movement in England that strongly influenced Louis Comfort Tiffany.  Although Morris died in 1896, his tradition was carried on by the eponymous company for many years.

#6 Crossing. North of the point where the major axes of the sanctuary intersect is the carved rood screen separating the nave from the chancel. ”Rood” means cross or crucifix.  It is believed to derive from the Anglo-Saxon word for a long pole (“rod”) used as a land-measuring tool.  The screen, also designed by Sutcliffe, bears the figures of the twelve Apostles plus St. Mark and St. Luke.  Above the central arch is the cross of the crucifixion and above that is the (empty) resurrection cross.  Sutcliffe’s original pen and ink drawing of the rood is available to view.   This unique screen was a gift of the Parochial Guild and the St. Katherine’s Guild in 1927.

To the left of the rood screen is the carved pulpit featuring the figures and symbols of the four Evangelists, Matthew, Mark, Luke, and John (l to r).  The stunning brass eagle lectern to your right shows how the words spoken there are carried on the wings of an eagle.

#7 Chancel. The choir is arranged like a medieval cathedral, with the singers divided between decani and cantoris sides.  As you face the altar, the Cathedral Dean would sit on the right, (decani or Dean’s side).  Opposite would be the leader of the sung service (cantoris or Cantor’s side). Also on this side is the console of the 1922 Casavant pipe organ which has nine divisions, 61 stops, 76 ranks and 4,648 pipes installed in multiple locations around the sanctuary. The windows above the chancel depict the apostles with St. Luke in place of Judas.  The beautifully carved reredos behind the high altar features entwined grape vines, symbolizing the wine of Eucharist, and oak leaves for Oak Park, with carved linen fold paneling.  The central cross bears the symbols of the four Evangelists.  The figures below and above the cross represent the Apostolic Succession from St. Peter and St. Paul to Bishop Charles P. Anderson, the first rector of Grace Church to become a bishop (elected 1905). The altar is of carved sandstone.  The great window above the high altar, by Willet, depicts Christ enthroned in glory while all creation rejoices.

#8 West Transept.  The Lady Chapel in the transept, with a bas relief carving of the Virgin Mary and child, was originally intended as a children’s shrine, hence the low stools and table. Also in the transept is a columbarium for ashes of the departed surmounted by a modern representation of the Garden of Eden. The Kim Thompson Memorial garden, outside to the East of the church, serves the same function. In the vestibule behind the organ console are windows with figures of St. Cecilia and St. Gregory, both patrons of Church music.

Many have found and continue to find that the architectural beauty of this space draws one unconsciously into the worship of God, who goes by many names, including Beauty and Mystery.  Feel free to sit, pray, meditate, or simply absorb the beauty of this space.  Thank you for coming in today.  All are welcome here. Period.

Grace Church is an excellent example of 19th century English Gothic Revival style which adopted and adapted design principles from 14th century English Gothic.  Founded in 1879, the Grace congregation had outgrown its small wood-frame church on Forest Avenue by 1898 when construction began on this site. The cornerstone was laid in 1901 and the sanctuary was completed to the clerestory level by 1905.  The tower was completed in 1922/23 and the building was consecrated in 1942 when all debt was retired.  The last stained-glass windows were installed in the mid-1960’s, finally completing the structure as originally envisioned by its architect, John Sutcliffe, more than 65 years earlier.  (See #4 for more about Sutcliffe.) The exterior of the building is white limestone.  On the South (Lake Street) side is a life-size figure of Christ, shown in full liturgical vestments, welcoming all.